Warning: Cannot assign an empty string to a string offset in /home/danie222/public_html/wp-includes/class.wp-scripts.php on line 447

In cities with a lack of parking, almost everyone has a bicycle. It’s a known fact that bicycles are the green answer to transportation as well as the healthiest form of city commuting. Bicycle riding in urban areas may be considered an innocent, yet subversive act at the same time.  Critical thinking along with a passion for music and bicycles is what generated the idea of linking both worlds.

Daniel Davidovsky converts his bicycle into a musical instrument. By attaching a contact microphone to the bike’s frame and applying various physical gestures and techniques, it is possible to amplify the sounds produced by the different parts of the bicycle.

In his work, “Music for Amplified Bicycle”, Daniel seeks to challenge our notion of the “musical instrument”. This challenge is powered by taking an object, the bicycle in this case, out of its natural context and through exploration of its sound qualities and the development of gestures and playing techniques that reveal the musical potential of the object. 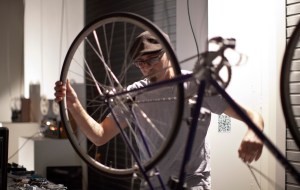 The choice of a bicycle as a musical instrument is not accidental. The bicycle provides a closeness to the rider, in a manner very similar to the relationship between the musician and her instrument.  Equally important is the fact that the bicycle offers a transparent mechanism where everything is exposed and visible.  In consequence, the approach when exploring the sound qualities is intuitive and the results are immediate.  Despite, or perhaps as a result of the bicycle’s limitations, the variety of sounds and the playing techniques are very similar to “conventional” musical instruments.

“Music for Amplified Bicycle” is the continuation of Daniel’s series of works characterized by the use of inexpensive sound sources and Low Tech resources. These works constitute a critical stand against consumer culture, the almost religious devotion to technology and the silent addiction to its mass produced products.

“Music for Amplified Bicycle”  is an artistic melting pot of music, social and environmental thinking and the passion for bicycles.  The connection between music and bicycles has been examined (and it’s still nowadays) by many artists in many different ways. In this context, “Music for Amplified Bicycle” finds a precedent in the work of the American composer and sound artist, Richard Lerman – “Gamelon Travelon” (Folkways, 1982) –  a piece for amplified bicycles performed by a group of 20 people riding their bicycle slowly in public spaces. While moving in a parade- like formation, the bikes produce a polyphony of rhythmic sound textures emerging from loudspeakers attached to them. Lerman also created a concert version of this piece for a three bike/six percussionist ensemble. In both variations, Lerman recreates a sonic reference of the Indonesian Gamelan Orchestra. However, Daniel approaches the bicycle as a musical instrument, disconnected from the action of riding and the public space in favor of a personal, patient and exhaustive investigation of the sound variety of the bicycle.

From a music perspective, Daniel expands the instrument’s boundaries with timbre diversity leading the investigation. This approach traces its roots in Frank Zappa’s famous apparition in an American TV program in 1963 in which he played an improvised piece for two bicycles, magnetic tape and orchestra. 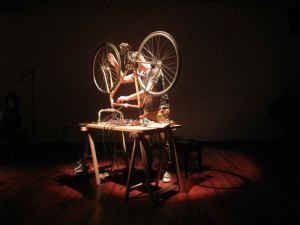 These procedures contribute to produce a wide range of timbres and sounds, propitiating the maximal utilization of the bicycle’s parts,  while there is yet always more to be discovered.