Warning: Cannot assign an empty string to a string offset in /home/danie222/public_html/wp-includes/class.wp-scripts.php on line 447 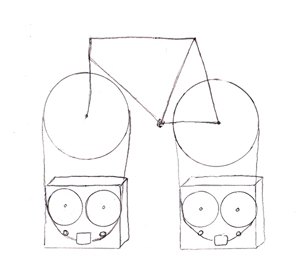 Stripping is a live performance, set to take place on the 80’ long Jackman Goldwasser video wall of the Hyde Park Art Center in Chicago, and within the center and its surroundings. The performance is the present culmination of a long term project, called Strip: a series of large scale, panoramic video pieces that Assor has created over the last 3 years. The latest piece in this series, Strip / Lakeshore East, is currently installed on the Center’s video facade, as part of The Hairy Blob, a show dealing with Time and curated by Adelheid Mers.

Stripping takes the essential process and panoramic audio-visual output of the Strip projects, and manifests it in real time and scale. The visual mechanism utilized in these projects involves a single camera, mounted sideways on a bicycle, shooting a continuous video of the artist’s path. The long, strip-like panoramic projection is comprised of many adjacent “windows” into this continuous, moving shot. These window-slices combine to resemble a long cross section of the street that expands and contracts with the rider’s velocity. In the performance, Assor combines pre-recorded footage, shot in the process of creating Strip / Lakeshore East, with live feeds, broadcast from a lo-fi, manually operated “Drone”: traversing and “scanning” the crowd, the center and its surroundings in real time, revealing micro and macro tableaux. A journey through cross sections of a place, of a body, of a social situation, of the insides of an art show- all composed on the fly and output back into the street via the video facade.

The sound performance is an equal part of this process. Daniel Davidovsky generates sounds through multiple live and pre-recorded, analog inputs. Central to his performance is a contraption hybridizing a road bike and old reel-to-reel tape decks. The tape loops played on these contain sounds recorded on both artists’ traversals of physical paths, cutting socioeconomic cross-sections through Chicago and Tel Aviv, and are mixed with audio gathered, via special microphones, from the magnetic fields generated by machines and structures encountered in these travels.

The performers attempt to strip the live environment, to render it flat via the spectacles of continuous motion, of the stitched together scan and record of the here and now with the then and there. They keep on mapping, while never managing to present a fully coherent picture of space- instead stripping down the process of electronic surveillance and scanning itself.

Media files will be available soon